Our beloved Smokie is no more..... 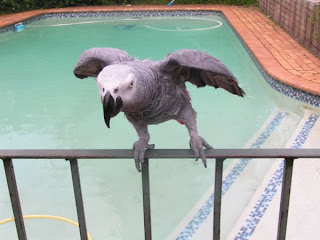 Last night our beloved African Gray parrot died.
Trish saw him sitting on the pool fence in a very uncomfortable manner, and a very distant look in him. We were not sure as to the cause of this and took him to the Vet. I thought that maybe something was stuck in his crop, as he lifted his head quite high at times, and put the top of his beak into the lower one. Then there were times that he seemed with it and times he would fall all over the place.
On the way to the Vet, he brought up a whole lot of food, and I thought Whew .... no expensive vet bills. Trish preferred that we take him for a checkup. Things did not improve with Smokie while we we waited to see the vet. When we saw the Vet and told him our story, he wanted to rule out metal poisoning, by doing an x-ray. The x-ray showed nothing. At this time he was having seizures, and would go into trance and then come out again. The Vet gave him some Valium or something to help with the secures, and would phone us later to let us know how things went.
One of the longest hours went past that we had in a long time. When he phoned it was not good news. Smokie was was still having the secures. We would now wait and see how what happend to smokie in the morning.

We made ready to go to the Vet in morning at around 8AM. About 20 to 8 then Vet phoned with the bad news. Smokie passed away during the night. He will be missed, as he was part of the family. No more saying goodbey to him and the kids in the morning. And no more chin rubs in the afternoons when I get back from work. No more bell rings when it is dinner time, so that he can come to the table to eat with us.

Smokie we will miss you dearly.
Posted by AntonD69 at 3:18 PM

Iam so sorry with the loss of your beloved smokie. I really hope you can find another, new and lovely smokie real soon
Bee, Thailand