Another tick done this year: I participated in the Toy run 2011.

Rewind many a year to when I was still at school, and I partisipated in the toy run with Roger. We both did it on our 50cc bikes. He had a RZ and I had a DT. Both Yamahas. I year or 2 later we did it again. Him with his then girlfriend, now wife, and as Roger's mom wanted to go with she was on the back of my bike.
One other thing I remember as that the going was very slow, and we took our helmets off while riding in convoy to the final venue, which was somewhere in Primrose if memory serves me right.


When I got the Bajaj, in December last year, I wanted to again experience the Toyrun, but I got the bike a few days after the Toyrun, and I hoped at the time to do it next year. Since its a small 180 cc, maybe Anya would be able to come with me. But those hopes were dashed when the engine ceased.

A few other things came together and I was able to purchase a F650GS twin. It's a bigger bike, and that meant Trish could come with me, and we could experience it together.

But before I can get to the Toyrun we need to get throguh the rest of the whirlwind weekend of the 26 / 27 November.

We are going live in less then a week with a new system at work, with lots of late nights being put in, finalising some issues. My boet was out here from the UK with his girlfriend, and the extended family were all invited for the weekend away in the bush near Mokopane (p.k.a  Potgietersrus). Trish and I also had my companies Xmas dinner on the Saturday, and the Toyrun on the Sunday. The plan was to leave early on Friday, if I had resolved all my issues at work, spend the Friday night in the bush, leave the kids there with the others, come back Saturday afternoon, go to the Xmas dinner Saturday night, and do the Toyrun on Sunday, if the hangover was not to bad.


There were a few later nights then expected, and I had a feeling that I might not be able to leave early on Friday for the 3.5 hour drive. If I could not leave the weekend would be spoilt for the whole family. So I organised that my sons could drive with their Ouma and Oupa early in the morning. Anya's aunt was kind enough, wanting to leave a little later, and give her a ride. So now if I would need to work late at least it is just Trish and me who wont be able to make it.


Friday night: Thaba-Nkwe
Luck was on my side, and I resolved all issues by 2 PM, and with all other parties using my module left for home. By the time I arrived, Trish had packed our bag, and we left just after 3PM for the long drive to Thaba-Nkwe near Mokopane. 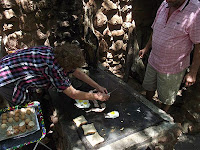 The time at Thaba-Nkwe was realy nice. We had T-bone on the braai, potato salad which Trish made and some garlic bread. Saturday night I slept not to well. The room we had didn't have a headboard and the room being round meant that my pillow kept falling off the bed. The bed being quite short for me, also did not help, as my feet were hanging off the other end. 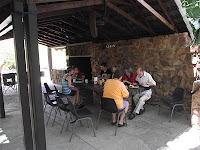 Saturday morning I got up just after 8 AM, Quite late for me, but much earlier then my Aunt and Uncle, as well as Julie and Jerome. Once everyone was up we made breakfast bush style. We made a fire, and added the coals to a oven come hot plate. Oupa cooked the onions, tomatoes, bacon and eggs on it, while Alex and me did toast over some other coals using a grid.
Afterwards, at around 11 it was cake and tea time, and also my aunts birthday. We did the traditional "Happy birthday song" and the Damhuis tradition of clapping each year the person is old. ... Lets just say it took quite some time. I hope to get to the same count one day.

At about 1 PM Trish and I said our good byes and left for home so we could shower, and prepare for the Xmas dinner.

Xmas dinner:
As I was getting dressed all in black, I realised my black shoes were still at work. (I ride home on a motorbike with proper riding boots). This was now a problem and as we had to leave in 10 minutes there was no way of getting the shoes in time. So on with some tekkies. Not posh but the only option I had available. The dinner was held at held at Scarlet Ribbon at Greenstone Ridge, not to far from home. AS all Investment Solutions Xmas parties, I was really looking forward to it. I was a little disappointed in the amount of food. The starter was tasty. The main was also tasty, but the lamb was undercooked, and almost raw. Pudding was also good, but not enough.

Each person got 500 play play money, and after dinner we all went to the gambling tables which was part of the night's theme. I tried my hand at roulette. Initially I made quite a bit of money, but tried to double it on red after it fell 3 times on black, and lost all my chips. It was fun playing any case. We left at about 12, and went past some friends who had a braai. I could fill up on some left over braai meet, which went down with a sprite.

Eventually we got into bed at about 1 AM. I was pretty sure we would be missing the Toy run. But would see what the morning brings.

The Toyrun:
Sunday morning I awoke at about 7AM. I tossed and turned and tried to get back to sleep, but could not, eventually getting up by about 7H30. I left Trish sleeping while I got the bike out, packed the rucksack and got the rest of the riding apparel ready. I had taped a little squirrel to my front bike visor, and added a few other toys to the rucksack with their faces sticking out. Trish had a cup of coffee just before we left 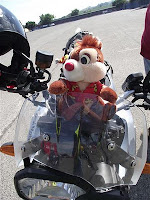 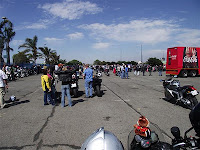 Arriving at ground zero, I have never seen so many bikes together in one go. There were possibly around 2 or 3 thousand bikes. We rode through the crowed and stopped at the back of the group. I took a few photos. I little later we got the signal that we were about to leave. It took some more time, before we actualy left. 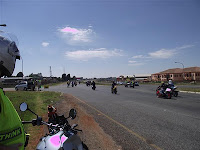 We left Checkers Hyper car park, with police blocking off the road for us bikers and then got onto the highway towards the airport. I was even impressed that they stopped the cars on the highway for us. We rode past the airport and got off by the Atlas road off-ramp, then left and right at the next traffic lights, and then followed the long "Great North Road" into Benoni. 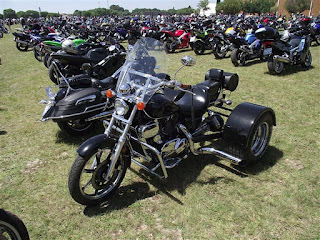 Trish and I stopped along the road to take some photos of the bikes, and then re-joined the group right at the back. Arriving at the sport grounds we saw even more bikes. I looked for a few other GS's and park my bike close by. Safety in groups I say.
I saw the one GS had a top box and went to speak to the owner, who introduced himself as Mark. After some more chatting I excused myself and Trish and I went to drop off our bears. Then we went looking for a tent which sold some food, as we both had not eaten yet. 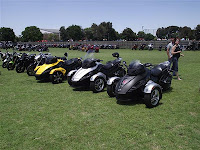 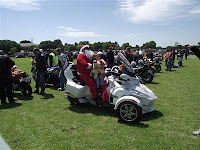 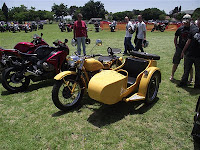 One tent was not to busy, and the burgers seemed like a decent size. Trish ordered a Cheesy something or other I had a burger. Nice in size, but the meat was still raw. I had a byte of Trish's breakfast and it tasted a lot better then mine. We had another bit of a walk throgu hall the stalls and then left for home. 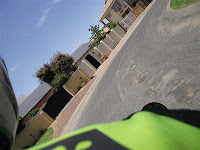 On the way home we drove past a pet shop, and I thought we could quickly stop and look how much the African Greys cost. No baby birds, but a nice breading pair for R2900.00. Still a bit expensive.
Since we weren't in a hurry decided to go past another bird shop we had passed, and their birds seems quite expensive. I also saw a beautiful stone from for R100.00 with would look nice next to the pond. Also an eagle on a rock for R190.00 which seemed very reasonable priced.

We visited two other pet shops but they either did not have babies, or it wasn't to our liking.

We got home shortly after 13H00, and the GPS said we had travelled just under 80km.

In the afternoon I helped Trish make home made lasagna and we entertained my folks, and Rudi and his girfriend for dinner.

Very nice write up. We attended the Santa run. Thanks for sharing this. Gerhard