What a weekend it was. 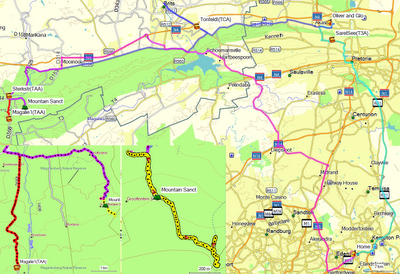 My folks wanted to go camping with our kids for a few days not to far away. They choose Mountain Sanctuary Park just outside Rustenburg.

Trish and I decided we would go and visit them on the bike. But the 150 odd kilometres one way seemed a little much for both of us, and since we had never driven from Pretoria to Hartebeespoort dam opted to go and stay with some friends in Pretoria.
I also knew that there was a very old geocache on the Magalies mountains, and when checking up on it found that it was a mere 5 km from the resort we were going to. We made all our arrangements which included an overnight stay for Peanut at Marius and Anneke, and then waited for the weekend to arrive.

Friday arrived, and we dropped of Peanut, gave Bobbie enough food for the day, and left for Pretoria on the bike just after 6 PM. 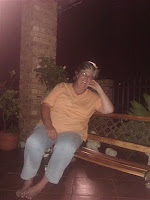 All went well until we got to the fountains circle. There the road was somewhat wet, which caused us to slow down and it looked like rain was immanent. We looked for a place to stop by couldn't find any suitable spot, so just rode on. Luckily it did not start raining. We briefly stopped for a geocache on the south side of the mountain, and then got to Oliver and Gloria's place just after 19H10. 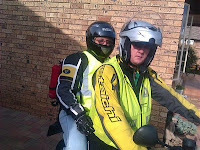 We spent the evening chatting on their stoep, and later on watched a Jeff Danham video. I fell asleep half way through it, and missed the best part. Oh well, will just have to get the video ourselves now. 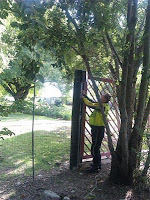 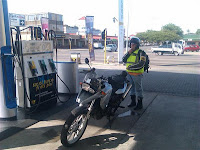 The next morning we left at 7H20. A little later then I had wanted too. It was a very enjoyable ride from there to Brits. We stopped of for a Tonteldoos geocache, on the way to the Chameleon village close to Hartebeespoort dam. We had a brief walk through the curio shops and got a new wallet for Trish at a "discount" of R150.00. Then we had breakfast at Woodies. Trish had a hamburger, and I had some type of breakfast. It was to much for me, and couldn't finish it.

The next stop was the Maanhaarrand geocache. It is one of the oldest 25 in the country. I have been wanting to do it for a long time now, but either the detour would have been to far, or we were to late in the day to do it. However.... now doing some research on the cache, I see the road to the cache is only accessible by 4x4s. So even if we had the time previously to do the cache we would not have succeeded.

We took to by-road from Hartebeespoortdam, which was a much more pleasent bike ride then the highway. Once I had to break very quickly, as I had almost missed seeing the speedbump in the road. We turned off the R104, and rode past Buffelspoort dam.

Soon we were on the sand road, and going up the mountain. From my GPS track I see it took us 20 minutes to get the 5 km up the mountain. The bike is new, and I don't want it to fall over, so I took it really slow. 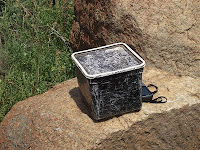 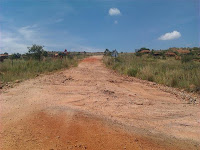 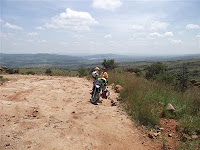 Once we got to the top, there in front of us was a small front wheel car. How the hell it had gotten up there I have no idea. Either the person had lots of patience, or it was a hired car.
We were told that approaching the geocache form the South Side was much more difficult then from the North side. So its beyond me how this little car got up there. 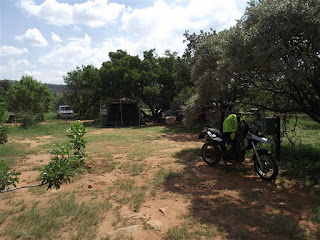 Trish opted to stay with the bike, and I scrambled up the koppie, after taking a few sips of the refreshing ice cold water we had with us. I expected to search for quite a while, but located the geocache in no time. I signed the log sheet, and did not trade anything, as I left all my "swag" in my bike jacket with Trish and the bike.

Took some photos, and a 180 degree panorama, before returning to the bike.

Back at the bike, Trish said 3 4x4s had passed. I had only seen two. After suiting up again we slowly returned to the bottom of the hill from where we came. Almost at the bottom we were overtaken by 3 mountain bikes. I got quite a fright, as it was very unexpected. This also made me realise how slow I was going, and soon picked up a little more speed. A little further on I got my own back, by passing them on an uphill.

We turned right at the corner shop, and now knew we were on our last few kilometres from our final destination. A few times we went through very soft sand, and as this was also very unexpected and the front wheel did tart to slide on the soft sand. Slowing down seemed to be a lot better.

The afternoon went very quick. I went for a quick swim with Anya. Then we had a lekker potjie lunch, and afterwards Pappa, Calra, Anya and myself took a walk up to the "Sliding pools". There we found a pool, and jumped in. It was nice and relaxing. After we had our fun, we walked down to the actual sliding pool, and Anya showed Carla and me how it worked. As I had already my walking shoes on, I did not join her. Then it was the 1.2 km hike back to the tents. 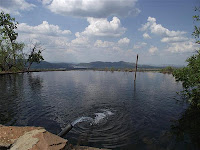 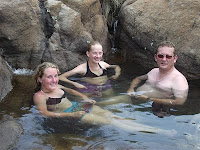 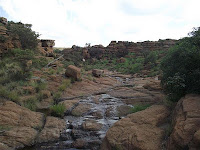 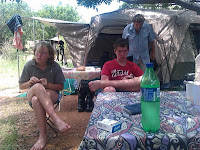 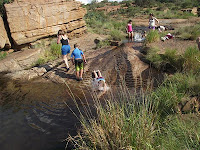 Jerome and Alex got sunburnt the previous day, and had enough of all of the camping. They opted to leave with Carla, a day early, and go home. So it was only Anya who stayed behind with Ouma and Oupa for the full camping trip (Well done girl!). 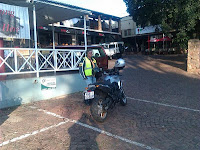 The ride back was 150 kilometers, and felt much longer. At Mooinooi we got onto the highway, and then off again at Hartebeespoortdam. We stopped in the little town for a smoke break. Must say the ride on the highway was very boring, taking the R104 was much more exciting. 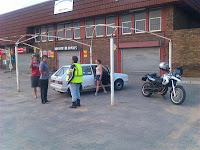 We stopped on more time for another smoke break just before the Olifantsfontein on ramp to give our bums another rest, and then took the N1 South, N3 South, R24 all the way home.


All in all a very enjoyable weekend, but it was a very long ride for both of us.