I have been waiting a long time now to get Trish her Christmas present. A young African grey parrot.
We have been looking for about a month now, but they are either to expensive, or they are to old. Trish specifically wanted a 6 week old one, who still needs to be fed. She reckons that one bonds better with the bird that way.

On the 22nd December I looked on Gumtree, and found two breeders advertising little ones for a reasonable price. One was in Pretoria, and the other one in Roodepoort. After phoning them, it was decided to go to the one in Roodepoort that same evening.

When we arrived, we were met by 4 or 5 little African grey babies. Trish chose one, and sat with it for a while. 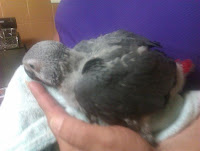 We found out it was born on the 5th of November. She fed it, and decided she wanted that specific little one.
We paid for it, and left. There was a definite tear in ladies eyes as one of "her" babies left the nest.

For a few days afterwards, we all came up with names, but it was Trish who would have the final say on waht its name would be. We thought of quite a few names, but the one Trish liked most was "Peanut". I think this is based of the little purple character of the Jeff Dunham puppets. 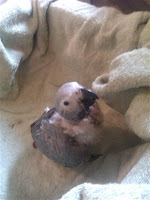 We decided to feed him 3 times a day. Around 7 AM, then 1 PM, and again at around 6PM. He gets fed what I call "Bird Pronutro". He loves it and eagerly gobbles it all up. Afterwards he get some water to wash it all down with. The kids, especially Anya seems like to hold him a lot.

The last few days, he has been trying to get onto the perch in his cage. We have put it as low as possible, and put some towels underneath. It is funny to watch. One can see he is still very young, as he is not sure how to climb on. Once he is on, we can see he thinks it is quite an accomplishment. And its even funnier when he falls asleep. He slowly starts rocking, and then awakes from his sleep. I have been told that the kids have seen him fall off his perch. Good thing the towels are there. 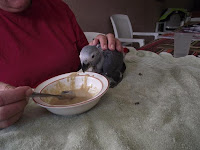 In the two weeks we now have had Peanut, his tail has grown, from about 1/2 a pinky width, to about 2 finger widths. Its a beatifull dark red colour. His wing tips are also black. I hope it stays that way.