We were celebrating new years eve with good friends of ours, and they always make a potjie on that night. We were invited to join in. I thought this would be the ideal time to make a small rabbit potjie just to taste what it would be like.

Driving past 1st avenue I have seen the butchery there advertise rabbits, and since I have eaten rabbit when I was very young, I wanted to taste it again now that I am older, and will now better remember the taste.

The day before new year we went to the butchery but they were all out, and suggested we go the "Mediterranean" a butchery in Jules street. We rode there, and found it on the Germiston side of the long road.
Inside there were lots of fish, and asking where the rabbits were, were directed to the last fridge on the right of the shop. We chose tow rabbits, got a few small other ingredients, and went home. We left them in the oven to defrost over night.

The next morning at about 10 AM, I now had to prepare them. I uncoiled each one, and saw the head, with the beady black eyes staring back at me. I washed off the rest of the blood (not much) and then saw some of the insides of the rabbit. There was the heart, kidneys, and I think livers. I removed all of these, as well as the head. I all became a little surreal to me. I have always wanted to do it, but I am definitely not used to it.

I then proceeded and cut it up into smaller manageable pieced for the potjie, and big enough for all to taste. I was not sure how to do all of this and tried to cut at the major joints. Doing the ribs and inside as the most difficult, as I really had no clue how to proceed. I tried to cut out the fillet, but the pieces came out much to small. 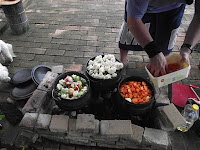 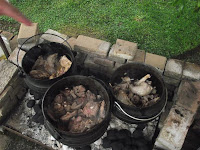 At our friends house we prepared the potjies, and then added to meat to brown. I added some garlic, and bacon, and then after it was all nicely browned, added the potatoes, vegetables, and chicken stock, as well as 500 ml red wine, pepper corns and mushrooms. It then simmered for about 3 hours.

The taste to me was quite bland. I should have added a lot more spices, and a lot more salt. I expected to taste and feel mush more like venison, and a litte tougher then the lamb and chicken potjie we were also making but when I dished up my portion the meat fell of the bone. 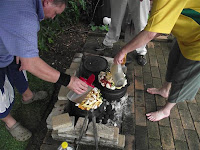 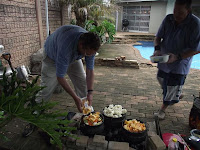 I also had some of the lamb potjie, as well as a taste of the chicken potjie. Both were a lot tastier then my rabbit potjie. Next time definitely add more spices, but I think not a bad effort for a first time.

The next day we got our rabbit potjie in 2 2L ice-cream containers. Quite a bit. For lunch on the 1st I decided I would extract the meet, and try that on two toasties. I added a lot of salt, and some origanum. This brought a lot of flavour in the meat. On the 2nd I had some more and tried it with some other spices.As there was still a lot left over, and I have no idea how long it will last I gave some to our dog Bobbie. He lapped it all up, except for the potatoes and carrots. So at least Bobbie had a good new year as well, with a fine meal.