The Gautrain and my first ride

I must confess that I was very pessimistic about the Gautrain a few years ago, and thought it would turn out a big white elephant.
As time wore on, and I saw the Gautrain being built, my interest in this new form of public transport here in South Africa intrigued me. We also did a geocache called "Gautrain Site visit" in Marlboro which prickled my interest even further.

When I heard the public service was to launch on the 8th of June 2010, I wanted to be the first one on the first train. I convinced a few work collogues to join me on this first historical trip. I spoke to about 7 people, and there were 4 of us at the station 5AM on this historical morning.

I arrived about just after 5 in the morning. It was still pitch black outside, and already there was a queue of about 6 cars waiting to enter the car park. As it turned out, the system which operated the boom gates was not working and it took 25 odd minutes to get that up and running. The boom gates being down, made me miss the very first public accessible train, which upset me a little as I so wanted to be on it, but one can expect a small glitch in a new system.

While waiting for the booms to open, I decided to take a few photos of the cars and station. As I was about to take a photo, this security guard asked me what I am doing. Now what am I supposed to answer? I have a camera in hand, what does he expect me to do? I wanted to say "Phone my wife", but being snotty, might cause problems, so I said that I was taking some 'personal' photos.

Once the boom gate system eventualy came back online we could edge our way through the booms and park our cars, after which I entered the station and was presented with my second queue for the morning to get our Gautrain gold cards. The 5 or so automatic machines where down, and the one and only manned kiosk was processing a person about 1 every 5 minutes (more glitches). Eventual a singe automatic machines came online, which helped little. What did help, was that a security lady came out with a red bag, and said we could buy a Gold card with R90.00 on it. I handed over my R100 (R10 for the card, and R90.00 into the t-purse) swiped the card, and was through the gates ready to go up for my first Gautrain ride. 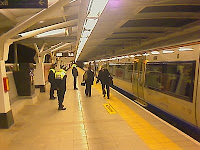 Taking the escalator to the top brought us to our first close up view of the Gautrain. It is very slick looking! Pressing the button let us into into a mostly white cabin with blue seats. Two on the one side and three on the other side. I thought that aisle is a little narrow, especially if you have some luggage (Maybe the ORTIA carriages are wider, don't know).

The acceleration was very smooth, and it was quite an experience to see the night lights of the East Rand (Ekurhuleni) from the Gautrain for the first time. The only real landmark in the darkness I could distinguish was Kelvin power station cooling towers. We were a total of about 15 passengers and 3 guards in our carriage. 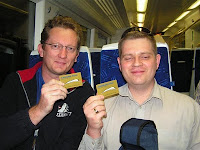 The deceleration at Marlboro was also very smooth , and the lights at the station seemed quite bright after the ride in the darkness. I remember that when I was in London, and arriving at the Canary Wharf station of being very impressed. Marlboro is no where near in stature to that of Canary Wharf, but I remember being just as impressed entering Marlboro station.

The trip to Sandton was quick. Really quick. The train swayed a little from side to side, which gave the impression what we were now going faster then before.

Once we exited the train at Sandton station we took 4 very long and steep escalators back up to the top. Again some memories from the UK surfaced.

Once outside we were met by the dawn of the morning, and a brisk walk to our offices at Inanda Greens office park. 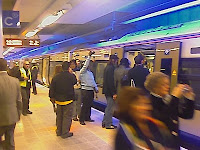 On the return trip, I set up my GPS to keep track of our walk back to the station, and it reported we had walked just over 800 meters to the station entrance from our offices. Five escalators down, we were at the platform taking us back to Rhodesfield. While we waited I saw a lady that works with us, and walked over to chat to her, and while chatting met up with two other friends as well.

On the way back I took some photos with a Geocaching TB and coin, which could be the very first Geocaching items on the Gautrain!

Back at Rhodesfield I wanted to load money onto my card for the next day, but was met with more system glitches, which took over an hour to sort out, but now I have an additional R200.00 loaded onto my Gautrain gold card. I will use the train for a few days more before I make up my mind if I will use it more often. I think it definitely is a good option for me during the soccer world cup starting in 3 days time, as traffic is going to be horrendous for the next few weeks.

All in all I am very impressed with the days events, although there were more 'glitches' then expected, but I suppose one can expect that from a new system delivered before the original due date.

One can see the stations are made to be functional and automated. I would have liked to see a sign, which tells you which platform the next train is leaving on. I was told that it would soon be there.

Looking forward to my next trip tomorrow.
Posted by AntonD69 at 5:33 PM No comments: