Bike Ride 41 - To Trichardt and back - Bike ride

Monday the 17th June was a public holiday and the kids had made plans with their uncle to go go-carting. This left Trish and myself free to do whatever we liked. And it ended up being a bike ride to Trichardt and back.

The BMW club we belong to have an alphabet challenge. The challenge is there to get you out riding and experience South Africa. The idea is to visit a specified amount of towns, passes, light houses, and harbours. All of them are outside of Gauteng. Ever since we became members of the club 4 months ago I wanted to go and do a few towns. The "right" day just never happened. But on Monday the 17th June 2013 that all changed. 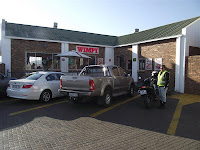 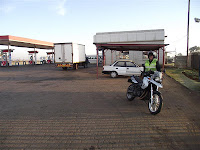 We left home at 06H50, so we could be at the Bapsfontein garage before 07H30 incase there were any other club members that wanted to join us on the days outing. We got there and waited till 07H35 and then left for Delmas. The ride there was blooming cold. It dipped to -3 deg Celsius at times. At Delmas we stopped for some petrol, and a hot beverage at Winmpy, which thankfully was open. We also stopped at a Delmas sign to take a photo for our towns visited album (Not a BMW challenge town).

Once we were warmed up, we left Delmas at 08H45, and attemped a geocache close to a dam. Since it looked like we night have to drive through a farmers land we opted to leave it and headed towards Leandra. 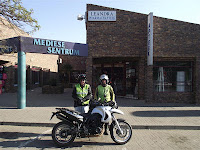 We left Leandra at 9H35, and rode via Kinross to Trichardt where we took our second BMW town photo before stopping at Marne Guest house (and bar) [S26 29.387 E29 13.807] for some lunch. We waited over 30 minutes for our burgers to arrive, but boy was it worth it. They were HUGE. And all for R45.00 each. We tried to order the "Large" burgers but since it was a public holiday they did not have the bigger rolls. Good thing, as we would not have been able to finish the larger ones. 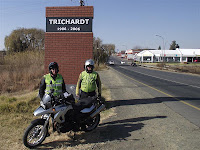 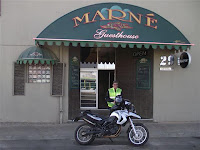 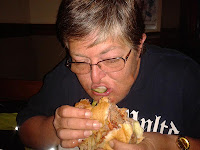 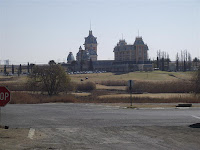 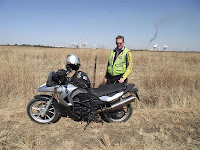 We left Trichardt at 11H40 and headed towards 2 geocaches in Secunda. The one was at some type of time capsule, but the entrance was closed, so we attempted another one by the air field. Luckily we found that one. We also saw 2 aeroplanes taking off and landing. Nice smoke break we had there. We also rode past "Graceland" which seems to be a casino and golf club just outside Secunda town.


We had meant to go to Charl Cilliers town, but somehow I got mixed up in the next waypoint and we missed it. We had a quick stop at Evander before heading back to Leandra.

At 13H20 we took our BMW photo in front of the NG kerk in Eendracht, and then headed off to Eloff via Devon and Delmas. 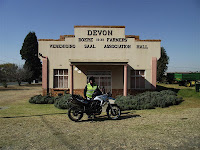 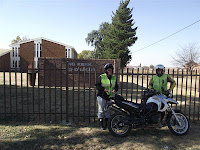 Just before Devon we stopped at the sign which said "Devon Correctional services". The stupid guard told us we were not allowed to take photos without getting permission of the supervisor. I said Ok I'll chat to the supervisor but there was no phone in the hut, and we would have to sign in ride to the offices get permission and then take the photo. All to much trouble. So in the end I said we would leave it. Strange thing though I have it all on video. She (the guard) did not even notice it on my helmet.

In Devon itself we got a nice photo (not a BMW club challenge) in front of the "Boere vereniging sall". Nice little building, and well looked after in this small town. We left Devon at 14H45 heading Delmas to take our last photo at Eloff. 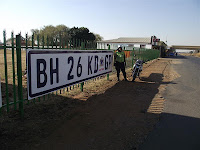 As we met up on the main road just before Delmas we had two people pass us on BMW bikes. One was on a 1200 and an the other on a orange 650 twin. I wondered at the time if they were perhaps club members.


At Eloff we found a big pumpkin and decided to take our photo there, and then a quick stop at the local (shitty) garage for a toilet break, As we left town we saw a huge numberplate against a fence and thought it would make for an interesting photo, so it was a quick stop before heading home.


Lessons learnt:
1) We will try and take a BMW challenge photo at the local church of each town.
2) A break every 40 odd minutes of riding suits both of us well.
3) Easy riding and lots of stops is an easy and interesting way to experience the towns of South Africa.
4) We are not yet bike fit.

Note: The photos where Trish and I are in have been "photo shopped" to show us both in the same photo. Can you see who was added and who is in the original photo?
Posted by AntonD69 at 5:10 PM No comments: