The last day of our 3 day outing, and it turned out to be quite a long day with all the stops we made on the way home.

We woke up after a good night's rest, and I got myself and Trish a cup of coffee and tea from the kitchen. Had it with some rusks we had over from the previous morning.

I went to the store room and got out my bike, and parked it with all the others on the lawn. then we sat down to a scrumptious breakfast, which contained some venison livers. It was delicious. Then we went back to the room packed all our stuff and then made our way home. Slowly. We stopped for photos at  8 Places (7 for the BMW Challange) and 3 geocaches.

We first went back into Groot-Marico for the Town Photo (Photo 1), and then got some petrol. Then made our way to Swartruggens (Photo 2) for a town photo and geocache. I must say the toll road costing R75.00 is ludicrously expensive, and must be the worst toll road I have ever ridden on. It is bumpy as hell.

We stopped at the Selons river bridge for a quick smoke break and geocache, and the onward to Boshoek for another town photo. We also stopped at a "Welcome to" sign by Pokeng (Photo 3).  I found it funny when I thought of "Welcome to Pokeng (nothing)". There was a huge stadium to our right as we approached Boshoek from the south. I thought it might be a 2010 World-cup stadium, but I was later to learn that it was not as we saw the real 2010 stadium later on in Rustenburg.

We took our Boshoek town photo by the post office (Photo 4), and then also stopped at a small antique store just up the road to buy some small souvenir of our trip. Trish got a "Love is patience" tile, and I saw a small knife which I wanted to add to my small collection.

Then it was through Rustenburg on the  R104, and we stopped at Kroondal for our next photo (Photo 5). We also looked for a place to have a drink, but we saw non to inviting. Then by mistake we got onto the N4 and off again at Buffelspoort where we had something to eat and drink at the garage. There were lots of other GS riders stopping at the garage, and riding past. There must have been some weekend thing on the go nearby for them. We took a photo here as well, but it was not part of the BMW Challenge (Photo 6).
Then onward over the N4 to Marikana, where we took a town photo in front of a hardware store. Then carefully road further in to get to Wonderklip, but since there was a sand road going to Wonderklip and Wonderklip is a tar town challenge decided to turn around, as the dirt road looked a bit dodgy. But looking at the GPSr I saw it was only 3 or 4 km away and the route around would take us a lot longer. Also if we did not do the town now then we would not be back this way in a long long time. So we turned around again and rode there along the train tracks and past a big mine. We were also stopped at a train crossing before leaving Marikana by a passing train.

Must say we did not feel to safe riding through Wonderklip. There was some uneasiness for both Trish and I so we decided to rather turn around and take a photo at the hospital sign as we entered Wonderklip. After the photo we got back on the bike and looked forward to the tar road ahead. It took us at lease 4 km before we hit the first patch of tar. I dont think a RT will make it there in one piece. The dirt road is quite bumpy.


Once we hit the N4 is was plain sailing all the way to Tant Malies where we stopped for a smoke break, and decided to get some Dutch goodies from the Windmill on the other side.

We drank a quick milkshake at the Windmill, and then bought our goodies inside, and then did the last leg of our journey home. We arrived home just after 5PM. A long day ... but a good day.

This was an awesome day, although we arrived at Groot-Marico an hour later then I had planned / wanted to.

We took our town photo in front of the B&B where we stayed and headed north around 08H15 through to Sannieshof and then Biesesvlei, and then further onwards to Lichtenburg. In Lichtenburg we took out town photo, did two geocaches (one was by Gen Delarey's grave site), visited 2 petrol stations to get to the loo, and then headed further north to Ottoshoop. 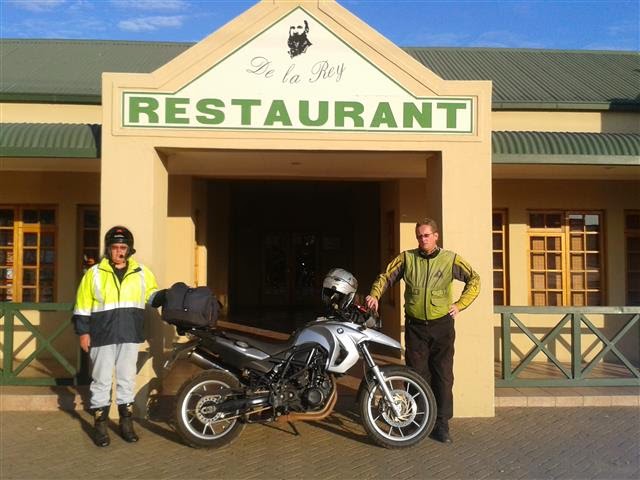 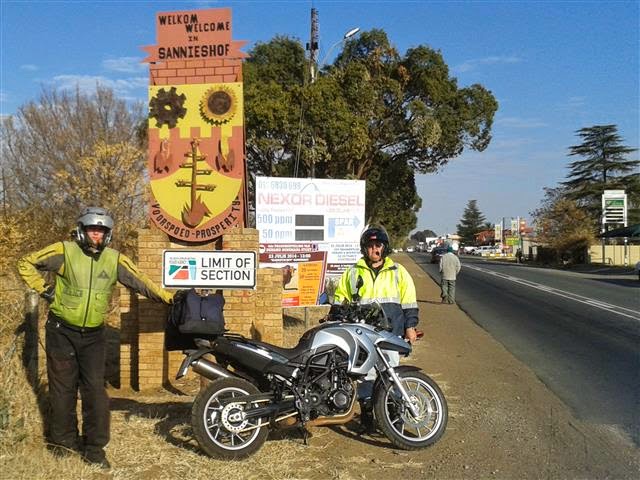 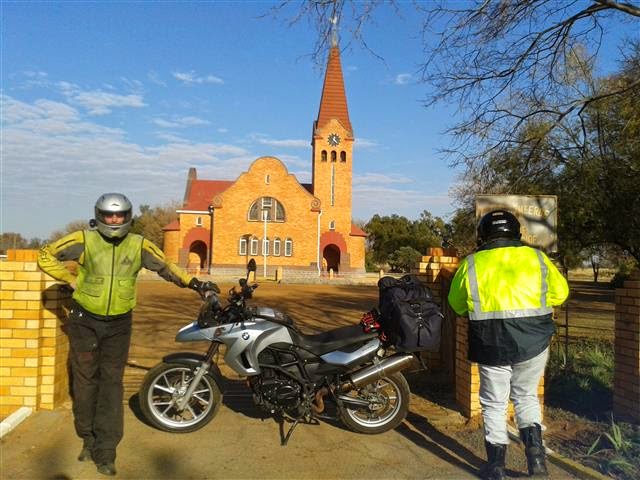 Ottoshoop is a strange town. Seemed like it had one street, and lots of bumps. A bump about very 150 meters. I went over the first few but soon enough looked for ways around them. And I was not the only one all other verhcles had made new paths around the bumps as well. So much so that there was almost a permenant dirt road next to the tar road. We saw quite a few houses, and it seemed like of people who had retried here. The police station looked like the only "business" in town. The libruary was closed where we took out town photo. 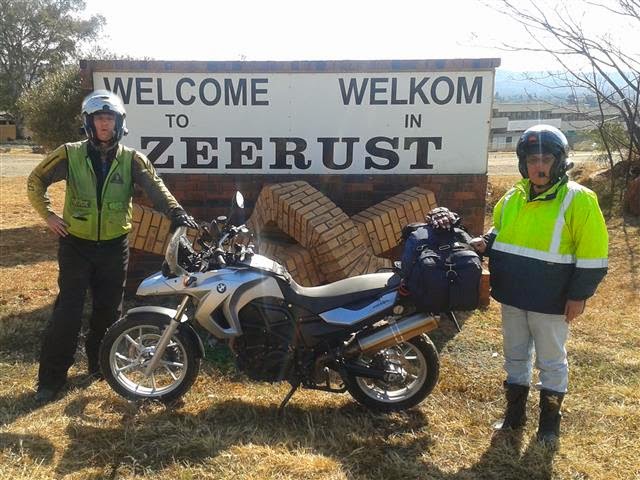 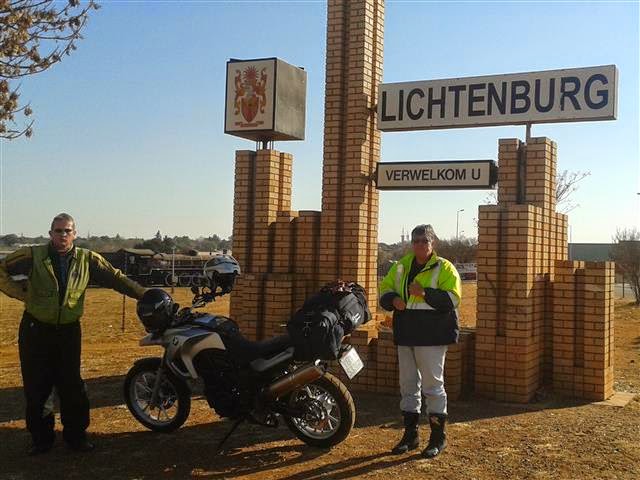 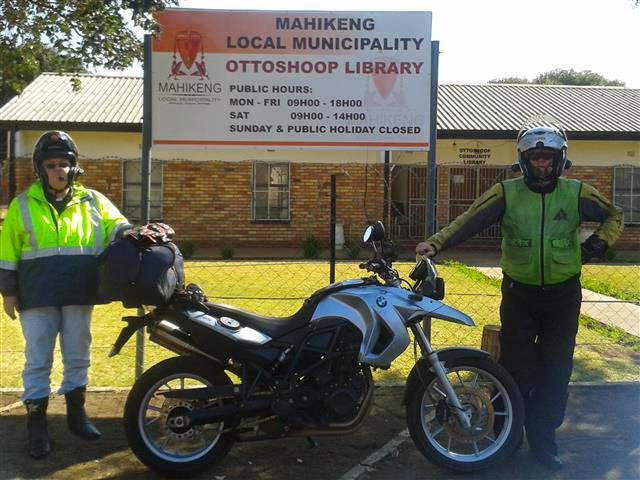 After the photo we went for coffee at "Die Gat - Pub and Grill" just outside of town. They had to rush out and buy some coffee and milk. We also had a quick plate of chips and then left for Groot-Marico knowing that we were now somewhat late.

We did a quick town photo stop in Zeerust, and then arrived at Groot-Marico just after 12H30. Most of the BMW club members were there already. But they were just moving into a small building where we were entertained by some Herman Charles Bosmad stories, poems (set to music). I did not think it would be that great, but I was blown away by the way they presented. 10 out of 10 for the living museum at Groot-Marico. 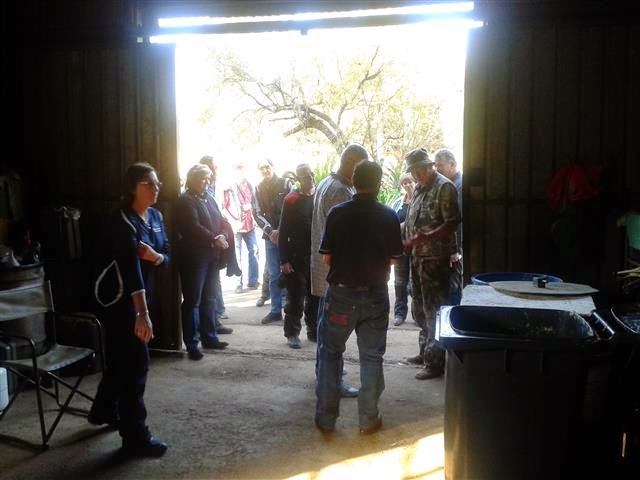 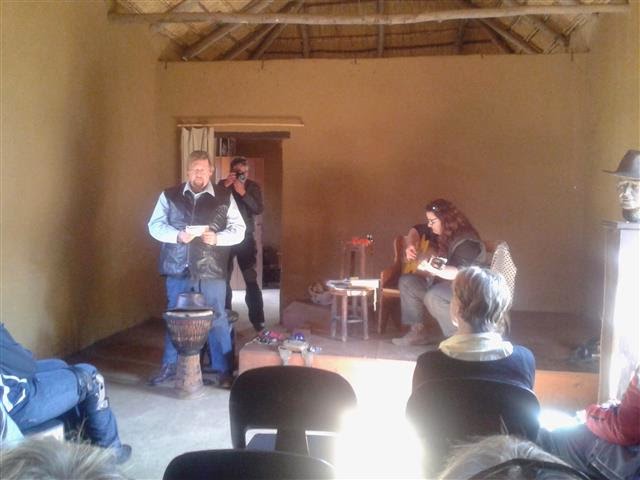 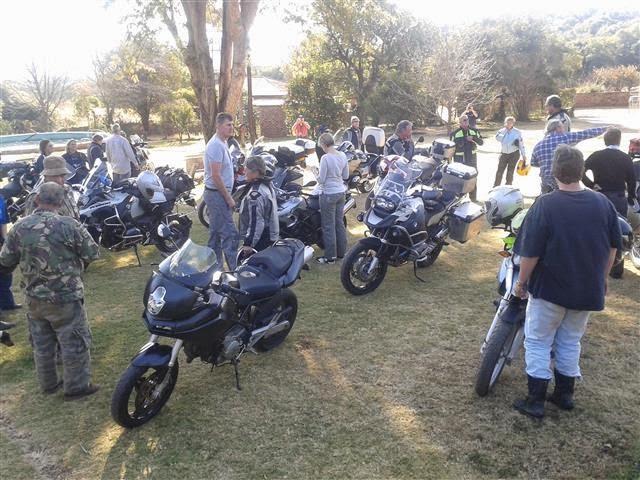 Then it was off to the farm where we would be staying for the night, and where we would get to sample some mampoer. Johan the farm owner entertained us the whole afternoon, by telling us how he makes mampoer the traditional way, and the whole process involved to get to the final product. After the lessons in making the mampoer, we were then escorted to the log veranda were we were now instructed in the proper way to consume the mampoer. Stoelle! 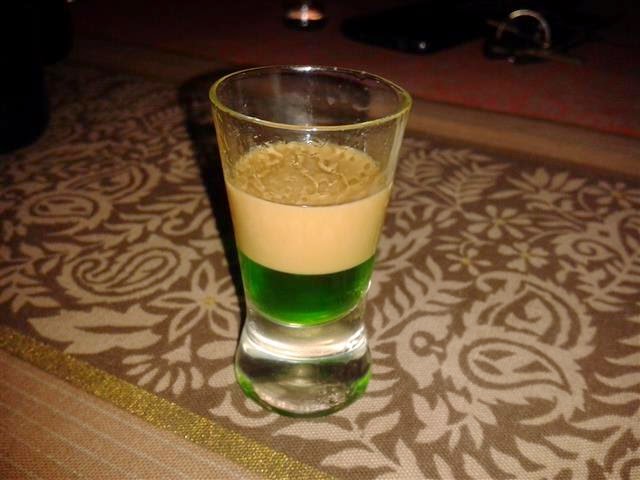 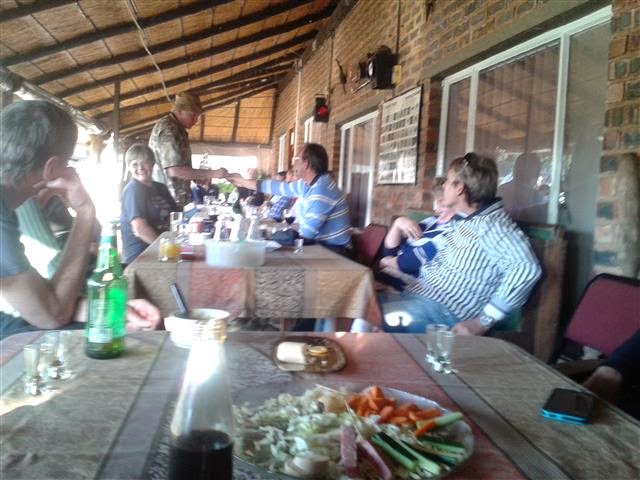 After the sampling we then had the most amazing dinner of venison meat, potatoes and veggies. It went down a treat. Then it was off to bed to get some rest after the whole days excitement.
Posted by AntonD69 at 5:07 PM No comments: 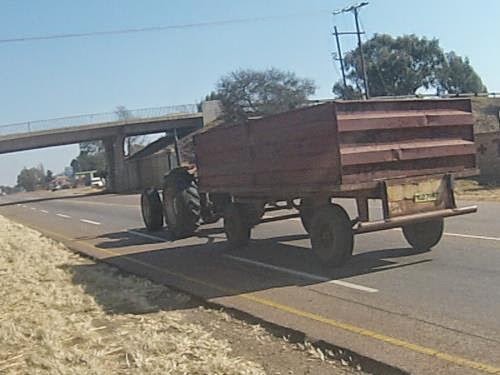 Some one at the BMW Motorcycle club in PTA organised a trip to Groot-Marico to go and "sample" some mampoer. Since it has been almost a year since we last added some new towns to our visited list, I thought it was the right time to combine the two thoughts into a single long weekend outing.

I got a days leave from work, and on Friday the 4th July we headed just after 7H15, out towards the West Rand via the N3 South then via the M2 onto Main Reef road. We stopped for coffee and a small bite to eat at McDonalds just after 08H00.

Soon after that we got the open road, and did a quick stop doing a geocache at the Tarlton Race track, and then headed to Magaliesburg, and then using the R509 towards Derby and Koster.

The people in Koster are so behind the times they still have the old Transvaal numberplate on their trailers as can be seen in the photo :) 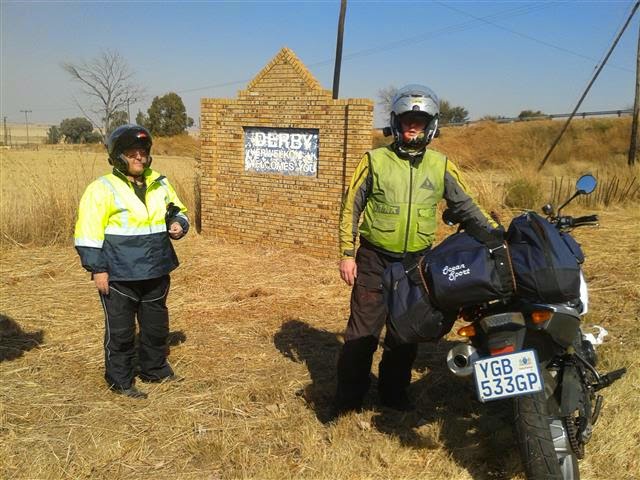 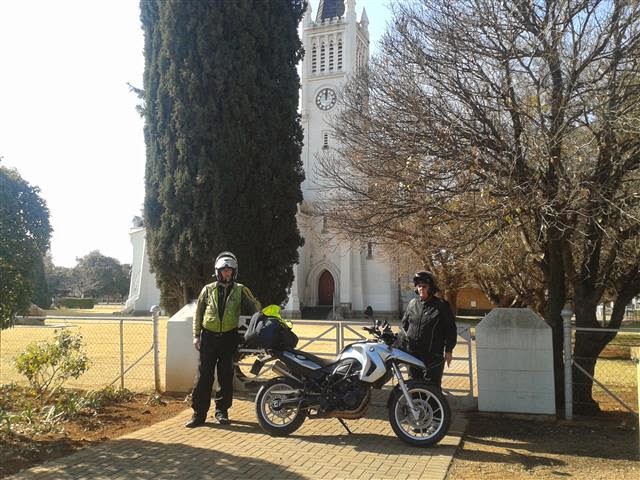 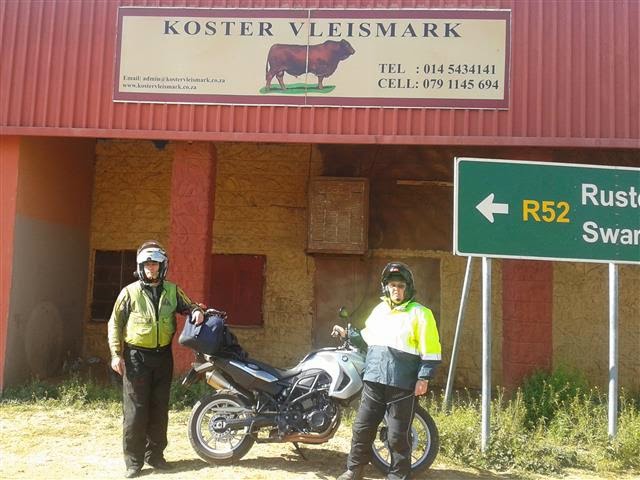 After Koster we headed south on the D826 and R30 into Ventersburg, where we stopped for a "Welcome to" photo, and town photo, a geocache, petrol, and lunch. We had lunch at Barcelos. The chicken burgers were very tasty but a bit small. Chips were outstanding. 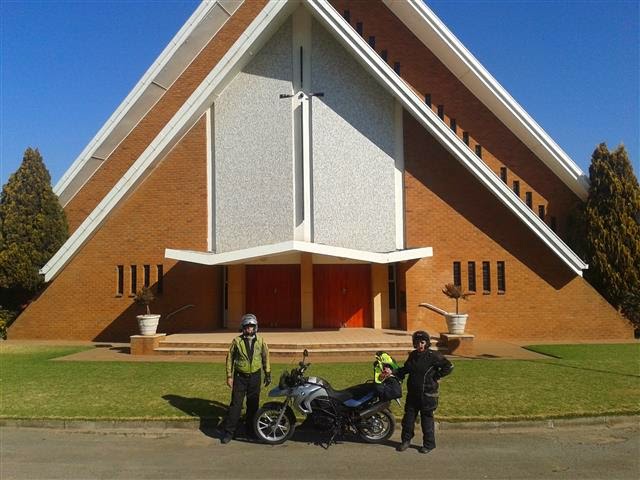 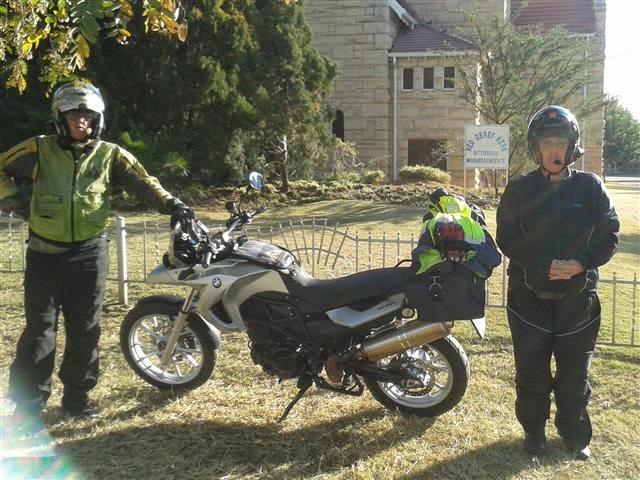 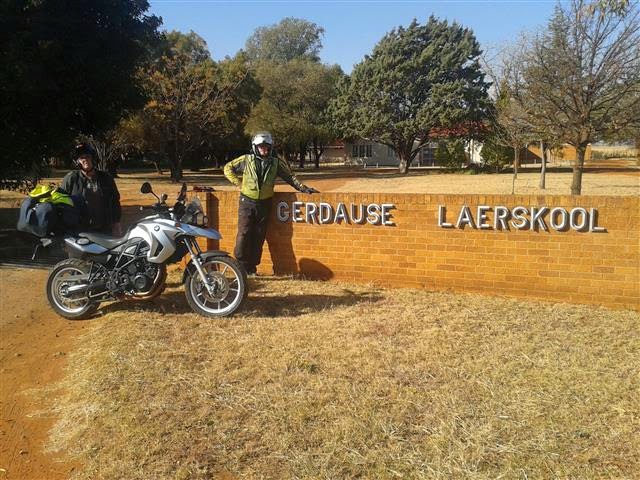 Then we headed west ward on the N14, and got some photos in Coligny and soon afterwards at Gerdau. On the road between Gardau and Ottosdal we picked up another 4 geocaches where the last one was at the church where there were Voortrekker tracks in the cement at the memorial.

Then it was the last 50 odd km towards Delareyville where we would stay for the night.

After finding a place to stay, I went to the shops for milk and rusks for our coffee and tea. After putting the action camera, intercom and cell phones on charge we we went for dinner at the restaurant the B&B was part of. Dinner was very good, and reasonably priced. Dinner and the night's stay came to just over R700.00.

The B&B looked very good, but the shower did not have a soap dish, and the bed felt very cheap. There was also some hooting at 2AM in the morning close by. All in all we give this place a 6 out of 10.