Washing and waterproofing my bike gear.

I was chatting to a good old friend of mine, Roger, who had moved to the UK, about the bike, and the clothing and told me about a product called "NikWax" he uses to wash his motorbike gear with and re-waterproofs it as well.

I did a bit of a search, and found out that Trappers sells the stuff her in South Africa. When we came back from Heidelberg, and were looking for an African Grey, we saw the shop in Boksburg, but they were already shut.

On the Friday before Christmas, I decided, that I wanted to go buy the stuff, as my jacked was looking rather dirty, and it needed a good wash.

I bought the stuff. I got two bottles. One to wash the clothes with, and a second to re-waterproof my jacked and pants. The reason for the re-waterproofing is that I Trish washed my jacked with normal soap some time ago.
The nice feature of NikWax is that the tops are colour coded. Grteen to wash with and Purple to protect with.
The guy at the counter had a look at my jacked and suggested, I rather get spray on water proofing. He disappeared, and came back a short while later. They were out of stock of the spray on stuff, and expect a new shipment by end of January. I'll go back then and get the spray on stuff.

We washed the pants and jacked, and then put it on the drying rack, with a fan blowing air over it. By the next morning it was dry. The feel now when rubbing them is a silky feel. Almost a little plastic-ky. I still waiting to ride through the rain with it though, to see how water-proof it is.
Posted by AntonD69 at 7:45 AM No comments:

On the Bike to Heidelberg and back via Nigel

The 16th December is one of many public holidays in South Africa.

Trish had wanted for a long time now, go and do a some historical geocaches. The most historically themed geocaches seemed to be in Heidelberg, about a 40 minute ride / drive from Edenvale.

The idea was to make a bike trip out of it, doing mostly historical caches. Doing more research I found 2 in Alberton, and so the plan hatched to ride from Edenvale to Alberton, anti clock wise around Suiker bos rand, into Heidelberg. Then back home via Nigel and Springs.
If all went well this would bag me about 8 to 10 caches, but it was more about the outing then the geocaching. 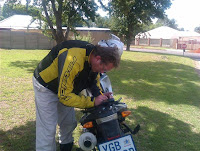 We found one in Alberton, and DNFed (Did Not Find) the second. I entered the co-ords of a one stop, where Trish could have a smoke break, but as it happened it was not the one on the Alberton to Vereniging highway, but the one from Alberton to Heidelberg highway.
I had a feeling we we were going in the wrong direction, but since I did not know the area, I thought the GPSr might know  a shorter or better road. Once we got close to the highway it was I realised what had happened, and decided to just go with the flow, and go past the eastern side of Suikerbos Rand to Heidelberg. 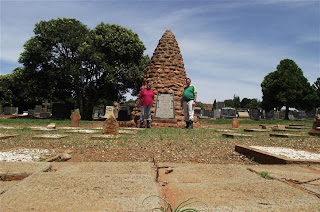 The ride on the N3 towards Heidelberg was quite uneventful, except that my head was bobbing around like one of those little men in the back of old cars. We did a geocaching about the woman and children dying in the concentration kamps in the Boer war, and then entered Heidelberg.
I have been past the town many a time in my life, but I think this is the first time I have actualy entered it. It seemed small,and quaint, but there were signs of the big city as well. Nando's, Wimpy, and FNB. 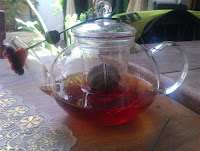 After attempting a geocache or two, we looked for a place to eat. We wanted something small town. We tried the "Plaashuisstoep Coffee Shop". But it was closed. Trish had seen some sign boards, and we went looking for them again, and that is how we found "Her Majesteas Salon" (link) 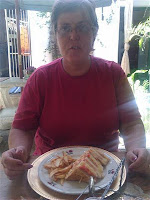 Its a small quaint little place, with lots of interesting hooks and crannies. We sat down, and of the over 100 teas they had I ordered my plain old Rooibos tea. Trish had coffee. My tea arrived in a glass teapot, and not in one of these modern tea bags. Oh no, it was once of those tea leaf holders my parent used to use. After the drinks arrived we ordered toasted sandwiches. The sandwiches were tripple layered, and well worth the R45.00 odd each. It filled the spot. 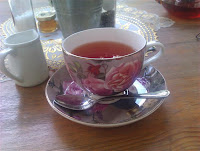 After lunch we explored the house a little the walls were almost half a meter thick, and when I asked the lady when it was built, the answer was shortly after the stone church around 1860, and this it was the second oldest building in Heidelberg.
We bought my mom a arm band, which was in the "R10.00 or less basket, but by the time we got to the till it was R75.00. "Oh well, mom will like it so lets just get it". 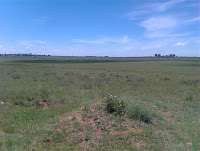 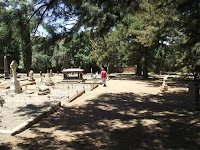 We did a few more geocaches in Heidelberg, most notably one at the grave yard, where the last person who was shot in the Boer war is buried. Then it was off towards Nigel, and then home via Springs.

As we passed East Rand mall, I thought it might be a good idea to stop off at the Pet shop. I want to Trish an African Grey for Christmas. We looked, but they didn't have any babies. They did have a breading pair for R2900.00, but Trish wasn't interested.
Although our bums were sore from sitting, we decided to go past another pet shop in Kempton Park, and see if they had any. Also none available there.

To Deneysville and back on the bike. Our first long distance ride

We, being Trish and myself, with Oliver went to Deneysville on Saturday on the bikes.

It was a total round trip of 240 km. It was cloudy with a chance of rain. From accuweather.com it looked a little better in Deneysville so we decided to take the chance hoping there would be no, or very little rain. Bike riding is fun ... as long as one doesn't get wet. The clouds were looming over us the whole day, but we only had 5 or so drops on the helmet on the way home.

Once we passed Vereeniging we got off the highway and the ride became a lot more enjoyable. I had to be a lot more alert, and the scenery becomes so much more interesting as well. We passed a hill, which was on our right, with what looked like steam coming off it. 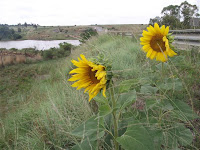 We stopped for two geocaches at the dam wall by the bridge going over the Vaal river. I also took some photos of the fishermen by the river, the slues gates, and two lonely wild growing sunflowers. 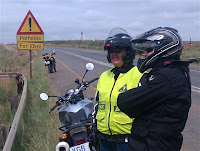 Afterwards we entered Deneysville, with lots of people setting up small stalls for the Saturday. We went to the Motorbike museum, and had breakfast at the inn. We started off with coffee for Oliver and Trish, and Rooibos tea for me, and each ordered a English breakfast.

Just as my tea was about finished, the breakfast arrived. 2 Pieces of toasts, 2 eggs, bacon, a sausage and half a tomato.  It went down well. Trish had another cup of coffee, a smoke, and after I paid the bill we went looking at the bikes in the museum. 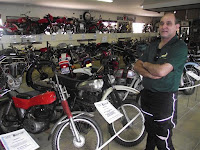 I loved looking and taking photos of the old bikes. Some were pre ‘60s and I found these the most interesting to look at. Lots of race bikes as well. I suppose those are really the ones which make history.

I am still amazed at how the old front shocks work on those old bikes. I spent about 5 minutes or so figuring out how the mechanical advantages worked on them front shocks. I wonder how the ride would be in relation with today’s front bike shocks. It must have been marvellous technology in the day. 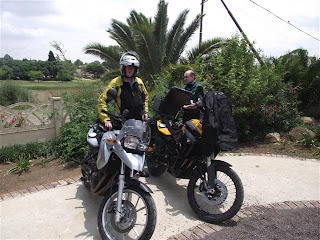 Then it was off into town, to do another geocache at an old gate which allowed access into a small reserve. I found it quite quickly, and Oliver was gob-smacked at the ingenuity of the cache. I knew it was a sneaky hide, and I was myself quite surprised ... and relieved ... at how quickly I found it.

Then on the spur of the moments Trish and Oliver decided to allow me to do one more cache close to the water edge. 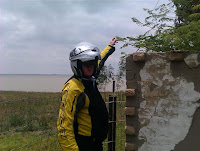 On the way there we passed this most amazing castle-looking house, with "moat and all". It had big signs, stating it was " Private Property" and other things of being prosecuted should one trespass. Should have take a photo. The moat was empty, but it must be beautiful with water and fish in. We arrived at the cul-de-sac and it took me a little while to find the geocache. I signed it, and by now the sun was coming out, and we were all getting quite hot in the motorbike gear.  The higher speed riding would soon welcomed to cool us down a little.

I had hoped to ride back home over Heidelberg / Nigel and pick up a geocache or two on route, but Oliver was leading and he took the same route as we came. We had to stop twice for road works being performed on the road. Looking at the sections where they were supposed to be working, and all the weeds growing in the road, it must have been months since they did any work on the road.We “pulled rank” and stopped in front of the cars already there, and once we were allowed to get going sped off, leaving them far behind.

At home we had a nice relaxing cup of tea, spoke about the day’s events, and once Oliver left Trish and I went for a snooze. It was quite tiring, all the concentration I had to do on the bike.

It seems like I am not yet bike fit. With more and more rides over time we will get there. Looking forward to the next outing. Sounds like it will be to Hartebeespoort dam and surroundings.There is a geocaching event in Rustenburg on the 17th. Maybe a bit to far on the bike with two up. But maybe we feel up to it. Lets see what happens.
Posted by AntonD69 at 10:39 AM No comments: