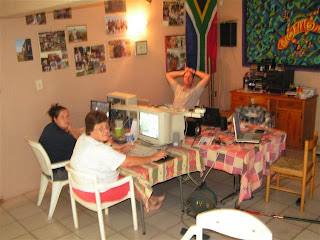 Well, we did play Diablo II over the weekend, but it was a lot slower going then I had expected. The plan for to quickly finish off the current Nightmare game and then by the end of the weekend finish the complete game again at Hell difficulty. One of the problems we had was that Glenda's character could not be found in any of the backups I had made. So Glenda took one of Trish's level 78 sorceress. Our Characters were only about level 62 when we started. The playing characters were thus 2 sorceresses, 1 Amazon (bows) and 1 Necromancer. It was a bit of a problem for us playing as we did not have someone with swards up front. We stated latish on Thursday afternoon about 6PM and played until just after 10 PM. Nightmare level was still not finished. 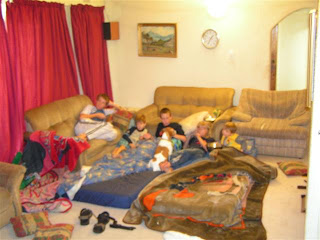 Saturday morning stated early at about 8AM and by night time we had finished Nightmare. We decided to try the cow level, but we were killed very quickly. We restored our characters as they were just before the cow level and started Hell. By around 10PM we had just killed "Blood Raven" in the graveyard, and decided to leave the evening there. We left the game running on Trish's machine so we could carry on the next day. Saturday we continued from around 8AM, again till about 10 PM. 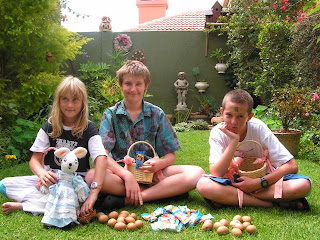 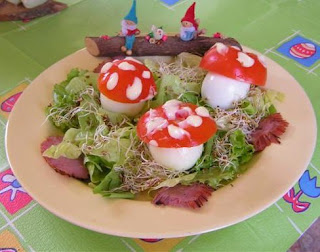 Sunday morning we did not play as it was Easter-Egg-Hunt for the kids at Ouma's house. We met up with my sister and Tante Tanneke. Tante Tanneke made lovely mushrooms from eggs and tomatoes. The kids enjoyed the easter egg hunt as well. Just after 1 PM I got an SMS from the video store that we had to return the borrowed videos. Wow did not realize that it was that late already. So we left in a hurry and took back the videos. We got another one for the kids to watch that day as well, while we played Diablo.
We continued our game again at about 3 PM and the plan was to play to about 10 PM. I did not want to make it to late, as I was hopingto go geocaching around Cullinan the next morning.

10 PM arrived and we were very close to completing Act 1 on nightmare. So we all decided to just finish of Andariel and then stop. Just before 10H30 she was dead and Act 1 completed.
At this point Glenda's sorceress had not yet leveled as she was much higher then ours, but by now she had less then 10% experience to go to level. So we decided that we would play a little more until she at least leveled.
We started Act 2 in the sewers and had some amazingly good battles down there. Matt's Bones were of good use keeping back the enemy, and my Valkry also helped lots.

With just a little to go on Glenda's experience we ventured out into the dessert and down one of the tunnels and that is where the wheels came off. We all died going to level 2 in one of the tunnels. It took us to 2PM in the morning to get back our bodies and getting Glenda to level.
At this point we decided not to go geocaching in Cullinan as we had to be back by 2PM for when Neville arrived, and the house looked like a bomb had hit it. There was also a little bit more of cleaning to do in the bottom room.

Monday morning we got up at around 9AM and started cleaning the house, and taking the PCs back to their normal places. Cleaned the bottom room, as well as the rest of the house.

Neville arrived at about 3PM and luckily he wanted to go do some geocaching. We did quite a few I had already done, but there was one "Spot a Boeing" that I had not yet done. We did a few more in the west end of Edenvale as well.

Tuesday afternoon, after work, we did a few more caches in the Kempton Park area, where there was another one I had also not done.

All in all a good weekend.

Side Note: Hell level in Diablo II is a lot more difficult the the other levels. One thing that makes it more difficult is that a lot of the monsters are immune to one or other thing. But this adds a interesting twist to the game, as one can no longer just shoot bows or whatever at them, one needs to change quite often from fire to cold to poison quite often to kill them. Although it is much more difficult I like this level a lot more then the others.
Posted by AntonD69 at 8:43 AM